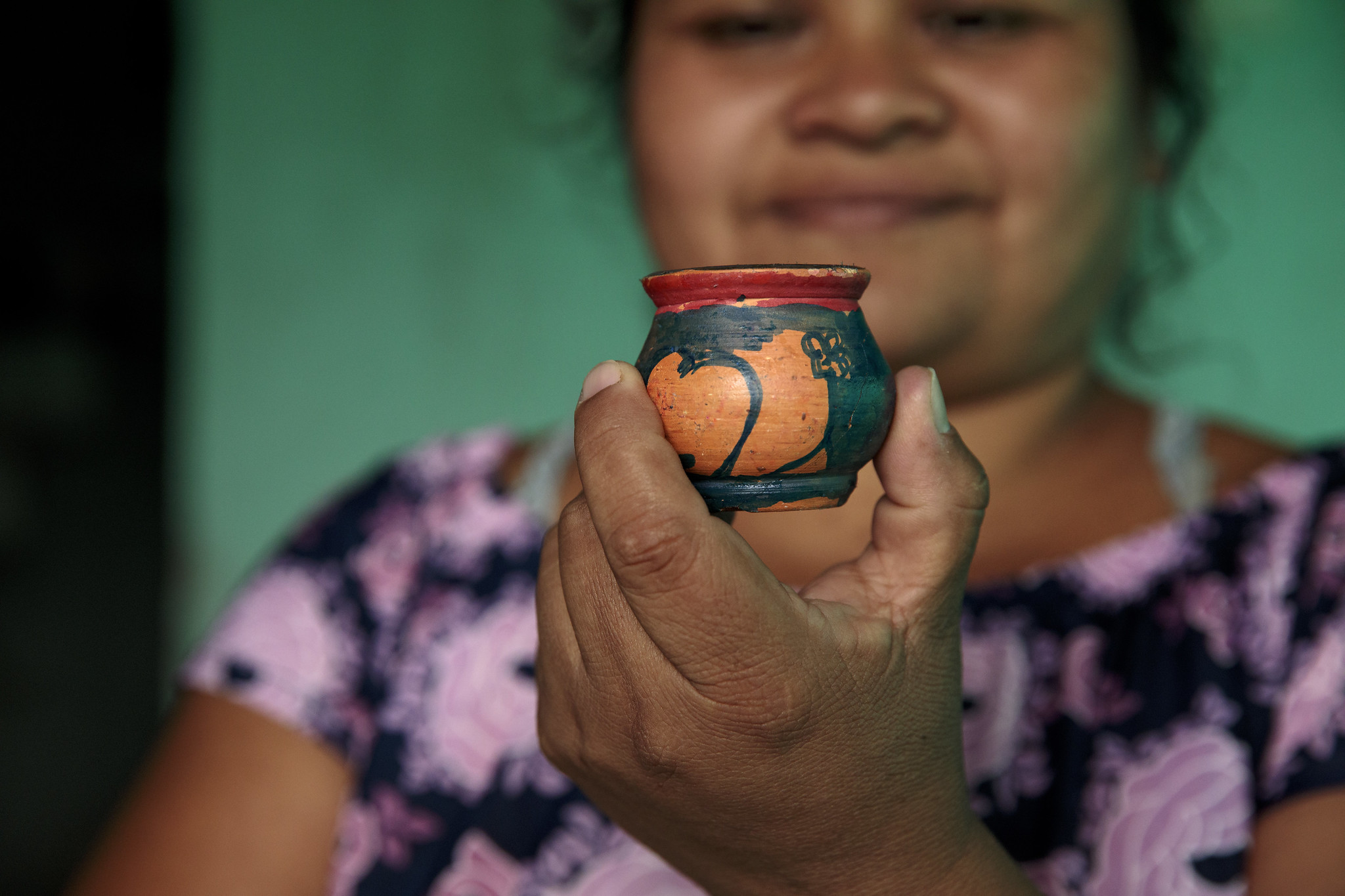 Photo Credit: UN Women/Ryan Brown: Oneida Alban, 40 years old, from the village of La Victoria, is the first woman in her family to ever own land, although she had grown coffee all her life.

A month ago, on 11 December 2019, the Colombian Constitutional Court issued an important decision recognising that women and girls who suffered forced contraception and forced abortion by their own armed groups should be recognized as ‘victims of armed conflict’. The decision is one of very few in the world to specifically recognise reproductive violence as a form of harm committed against women and girls in times of conflict. It thus sets important legal precedent in recognising a form of gender-based violence that has long remained invisible. Although the full written decision has not yet been made publicly available, a summary of the decision has been published. In what follows, I analyse this summary.

The case was brought by Women’s Link Worldwide on behalf of Helena (pseudonym), a young woman who had been forcibly recruited into the FARC at the age of 14. While with the FARC, she was forced to take contraceptives (injections) and forced to undergo an abortion when she became pregnant. She suffered significant and long-lasting health consequences as a result of the unsafe conditions in which these procedures were forcibly carried out. Continuing to suffer negative health consequences, Helena fled and was in hiding for many years until the peace deal with the government was signed. In 2017, she submitted an application to be recognised as a victim and to seek reparations under Colombia’s Law on Victims and Land Restitution (Law 1448). This law, adopted in 2011, recognizes victims of the armed conflict and confirms their rights to truth, justice and reparations. It includes provisions on the restitution of land and reparations, and requires that special attention be paid to the needs of specific groups and communities, such as women, survivors of sexual violence, trade unionists, victims of forced displacement, and human rights defenders.

The agency charged with the registration of victims under this reparations framework (UARIV), however, subsequently denied Helena’s claim for victim status. In doing so, UARIV had relied upon an article in Law 1448 that denied victim status to members of illegal armed groups (Article 2(3)), and held that, in any case, Helena’s claim was submitted outside of applicable timelines set out in Law 1448. Helena fought this decision; while the first instance court did grant her access to government-provided medical support, her claims for recognition as a victim and for reparations under Law 1448 were dismissed in both first and second instance. She thus appealed her case to the Constitutional Court who heard the matter in 2019. Importantly, Helena’s case was selected for review by the full panel of nine judges, rather than being decided upon by a panel of three judges. This illustrates the importance the Constitutional Court attached to the issues.

In its December 2019 decision, the Constitutional Court firstly found established that Helena was the victim of grave violations of her fundamental rights. The Court subsequently held that in dismissing her application to be registered as a victim of the armed conflict, UARIV violated Helena’s fundamental rights on two grounds. Firstly, UARIV had violated Helena’s rights as a victim by failing to interpret the applicable rules in accordance with established constitutional principles of most favourable interpretation, good faith, pro personae, and the primacy of substantive law. Secondly, UARIV failed to properly substantiate its decision by neither acknowledging the acts of forced abortion and forced displacement Helena suffered, nor by recognising that Helena’s specific circumstances constituted force majeure, preventing her from submitting an application within designated timelines.

The Court acknowledged that, on its face, Article 2(3) of Law 1448 allowed for the denial of victim status to ex-combatants who demobilised as an adult, and that, under this interpretation, Helena would have to seek reparations through other mechanisms, not including Law 1448 (as Helena fled the FARC after she turned 18). However, the Court also questioned whether this exclusion in Article 2(3) was consistent with Colombia’s obligations towards victims of the armed conflict, noting in particular the widespread practice of forced contraception and forced abortion within the FARC and that these acts were often perpetrated upon girls under 18, or upon young women who had only just reached the age of maturity.

According to the Court, denying Helena the right to be recognised as a victim under Law 1448, therefore, would violate her rights to access justice and to timely and adequate protection measures. Noting the principal obligation on the state to recognise victims of sexual violence as victims in such a way as to guarantee their rights to integral reparations, the Court also held that as a victim of sexual violence committed within an armed group, Helena would not have access to other avenues of reparations beyond Law 1448. As such, for the Court, registration in the Register of Victims constituted her only available avenue to repair her fundamental rights.

Importantly, the Court held that the exclusion stipulated in Article 2(3) could not become an obstacle to reparations for victims of sexual violence who, as ex-combatants, where forcibly recruited into those illegal armed groups at a young age. Such a rigid interpretation of Article 2(3), according to the Court, would thus create an unconstitutional lack of protection and vulnerability. The Court also reiterated the state’s obligation to provide immediate, comprehensive, gender-sensitive and specialised health care to all victims of sexual violence by armed actors for such time as deemed necessary to overcome the physical and psychological health consequences of such violence.

For this reason, the Court relied upon the principle of declaring a ‘constitutional exception’ (‘la figura de la excepción de inconstitutionalidad’) as provided for in Article 4 of Colombia’s Constitution to overrule the applicability of Article 2(3) of Law 1448 to Helena’s case. Pursuant to this principle, when faced with a conflict between an ordinary legal norm and a constitutional norm, the Court may declare a constitutional exception to preserve rights guaranteed by the constitution in a specific case. In this case, the Court held that relying upon this principle was the only way to guarantee Helena’s fundamental rights and to find an adequate balance between Colombian law and Colombia’s international legal obligations under international humanitarian law and international criminal law. Not doing so, the Court stressed, would give rise to consequences that are unconstitutional. As such, the Court rendered Article 2(3) of Law 1448 inapplicable to this specific case.

Significance of the decision

In finding in favour of Helena’s registration as a victim of the armed conflict, this case establishes that ex-combatants who were forcibly recruited into illegal armed groups and suffered sexual violence, as well as reproductive violence, within those armed groups may seek victim status and thus have access to reparations under Law 1448 – a right they did not have before – regardless of the age at which they demobilised or fled. Beyond the significance of this finding for the claimant in this specific case, therefore, this decision also sets important legal precedent in recognising that victims of sexual and reproductive violence within armed groups are victims of war crimes, which follows earlier jurisprudence by the International Criminal Court in the Ntaganda case (here and here). The decision is also one of very few in the world to specifically recognise reproductive violence as a distinct form of harm committed against women and girls in times of conflict.

As part of the case, the Court received 17 expert briefs from national and international human rights organisations, women’s rights organisations, academics and international experts, including one from the author of this blog post (written jointly with Ciara Laverty). In our amicus request filing, we offered the Court a comprehensive overview of the way in which reproductive violence has long remained invisible in international law, how it is increasingly being recognised, and why it should be recognised as a specific and distinct form of harm, including when committed within armed groups.

Reproductive violence is a widespread yet understudied phenomenon that occurs in times of both conflict and of peace. It can have serious physical, mental, emotional and other consequences that persist long after the violence has occurred. It is a form of victimisation connected to but different from sexual and physical violence, due to the distinct harm it inflicts and the underlying value it is said to violate; reproductive autonomy. Although reproductive violence affects individuals of all genders, there are distinct forms of harm and violence that are inflicted only upon women and girls because of and directly targeting their sex-specific biological reproductive capacities, such as forced contraception, forced abortion and forced pregnancy.

Historically, however, there have only been few instances where such violence has been independently recognised and considered. This left reproductive violence relatively invisibilised in international law. Nonetheless, current developments reflect a growing recognition that reproductive violence constitutes a distinct form of violence that should be independently recognised as violating specific, individual rights and may also constitute (international) crimes in certain circumstances. This decision by the Colombian Constitutional Court recognising the specific victimisation of female ex-combatants through forced contraception and forced abortion thus contributes to providing greater legal recognition to a form of gender-based violence that has long remained invisible in international law.

Importantly, in addition to claiming her rights as a victim through the constitutional action that was the subject of this decision, Helena has also requested participation as a victim in case 007 before the Special Jurisdiction for Peace. As such, further jurisprudence, including on individual criminal responsibility for acts of reproductive violence such forced contraception and forced abortion, may be forthcoming in Colombia.