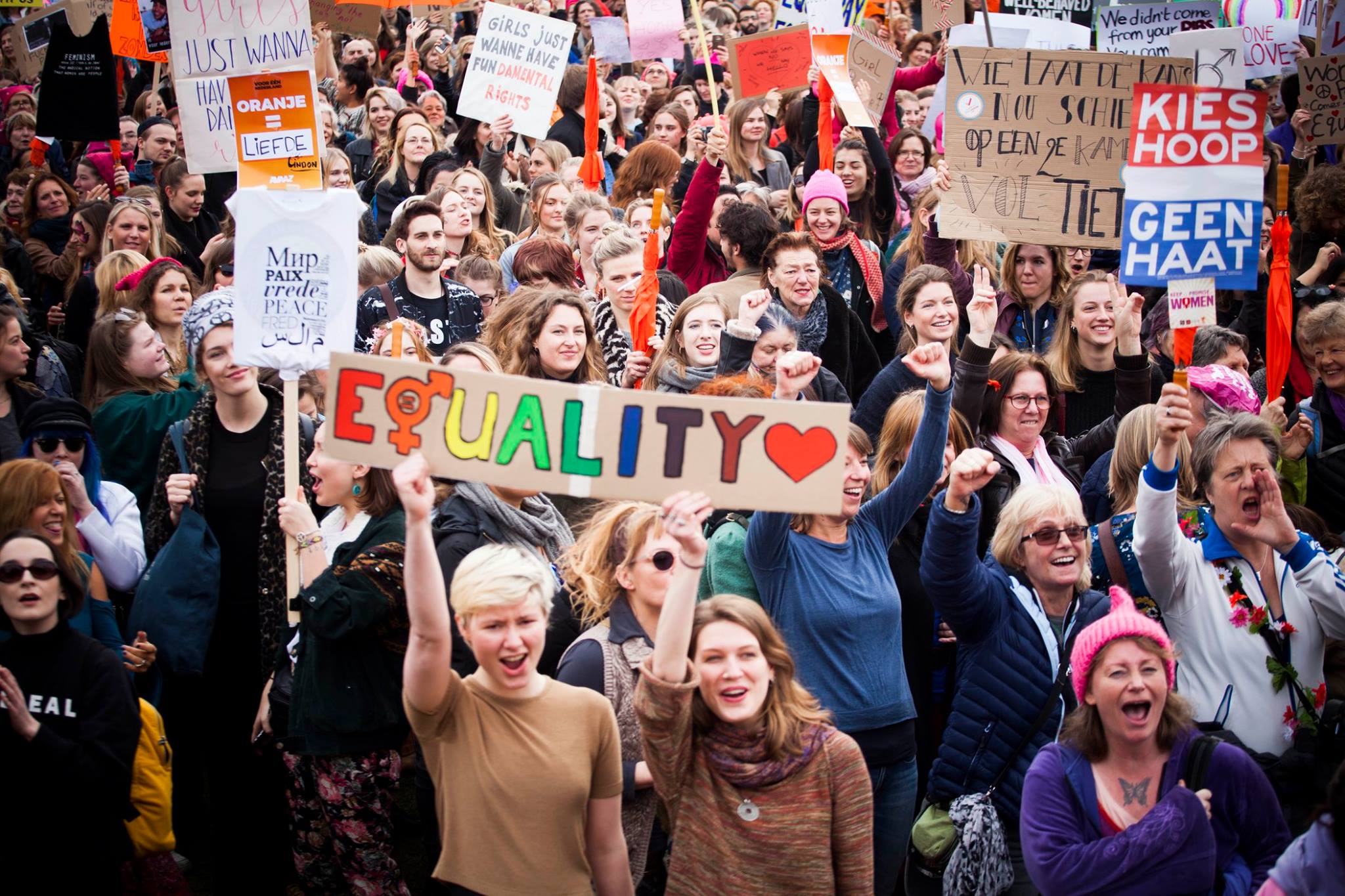 This weekend, around 20,000 people gathered in Amsterdam, the capital of the Netherlands, for a second Women’s March this year, this time specifically directed at Dutch politics. With the much-anticipated (for better or worse) parliamentary elections in The Netherlands only a few days away (15 March), it was a moment for many to show their support for the world-wide movement calling for equality, inclusivity, and tolerance, raising their voices against the rise of right-wing populism fuelled by fear and hatred all over Europe and elsewhere in the world. People from all ages, genders, and backgrounds marched together from Damplein to Museumplein in a sea of orange and other colours in a spirit of comradery. Beyond a call for inclusivity and equality for all in all aspects of life, the March was also an attempt to underscore the importance of the upcoming elections, and the power we have as citizens to change the negative tide that seems to be washing over Europe. Now more than ever it is our responsibility to change these dynamics and vote against hate.

This Women’s March on Amsterdam followed in the footsteps of the Women’s March on Washington on 21 January 2017, the largest protest in US history. Hundreds of Sister Marches were organised around the world, with an estimated total number of 5 million people marching. Amsterdam’s Sister March in January drew approximately 3,000 people to the Museumplein. This time again, there were many incredibly creative signs, some specifically directed at Dutch politics, in particular Geert Wilders and his so-called Party for Freedom, others referencing broader messages of equality and justice. Like at the Women’s March on Washington, a group of women also performed MILCK’s powerful song I Can’t Keep Quiet along the route.

Speakers and performers before and after the March included Marjan Sax, long-time feminist advocate and founder of several feminist organisations, transactivist Vreer, Devika Partiman, founder of StemOpEen Vrouw, Petra Benach, main organiser of the Women’s March Netherlands, and spoken word artist Babs Gons, with Anousha Nzume as MC. What I appreciated in particular was not only the broad demographic participating – from grandparents to grandchildren and everything in between – but equally the attempts made by the March organisers, as with the Women’s March on Washington, regarding inclusivity. Repeatedly calls were made during the various speeches to remember and honour those who could not, for whatever reason, join the march (such as the undocumented for fear of being arrested), and particular attention was given to those with disabilities, including an interpreter for the deaf on stage.

But the March aimed at more than raising our voices for justice and equality for all. It was a call to action to the citizens of the Netherlands to vote with their conscience on Wednesday. To vote against hate and for greater diversity, because as one of the signs said “Diversity is our Strength”.

White men have dominated Dutch politics for far too long, and this problematic reality hit us again during the Party Leaders Debate on 12 March, with the party leaders of the eight biggest parties leading the polls (minus Geert Wilders of the Partij voor de Vrijheid (‘Party for Freedom’) who declined, as per usual, to participate in this debate). Of these eight parties, only one is headed by a woman (Marianne Thieme of the Partij voor de Dieren (‘Party for the Animals’)). During the 12 March debate, as the only female partly leader, she was asked “Of your fellow party-leaders, who do you think is cutest?” It was the most important televised political debate this year. Of course this question wasn’t posed to her male colleagues. Sexism to the fore, yet again! And are we surprised? Of all 28 parties participating in the elections, only three are headed by women, and two have no woman on their list at all (the one-member party Vrije Democratische Partij, not currently represented in Parliament, and the Staatkundig Gereformeerde Partij, with currently 3 seats in Parliament). At the moment, only 57 of 150 Dutch Parliamentarians (38%) is female, and if we are to believe the polls, it seems likely that this number will only go down rather than up after the Wednesday elections.

To increase the number of women in politics, a new initiative has emerged called “Stem Op Een Vrouw” (Vote For A Woman). Perhaps symbolically, 2017 also marks 100 years since women in The Netherlands gained the right to be elected to public office (although they didn’t get the right to actually vote in elections until 1922). What would be better than to reach full equality this year? As the Stem Op Een Vrouw initiative explains, a lot of people already (symbolically) vote for the first woman on their preferred party’s list. But what many people don’t realise is that voting for women high up on a party’s electoral list in the Dutch system of proportional representation won’t actually change these numbers. Our votes to the respective party will ensure that women high on the list get into Parliament in any case. Instead, we should use our preferential votes to vote strategically for women lower on a list. Only by voting for women who, without these preferential votes otherwise would not win a seat in Parliament, can we change the gender balance.

But we don’t just need more women in Dutch politics. We need more diversity in every respect. Currently only one Parliamentarian is black. There is only one trans-woman currently on the list of party members hoping to get elected. And the majority of Dutch parliamentarians are culturally “autochthonous” Dutch. This lack of ethnic, gender, cultural and other diversity is not and cannot be representative of Dutch society.

The Women’s March was one of several protests in The Netherlands calling for greater diversity and equal rights regardless of gender, background, ethnicity, nationality, or other status. As I am sure many of my fellow country-women and -men, I will be watching the election results on Wednesday evening with both fear and anticipation, knowing that Nevertheless, I persisted and voted with my conscience.