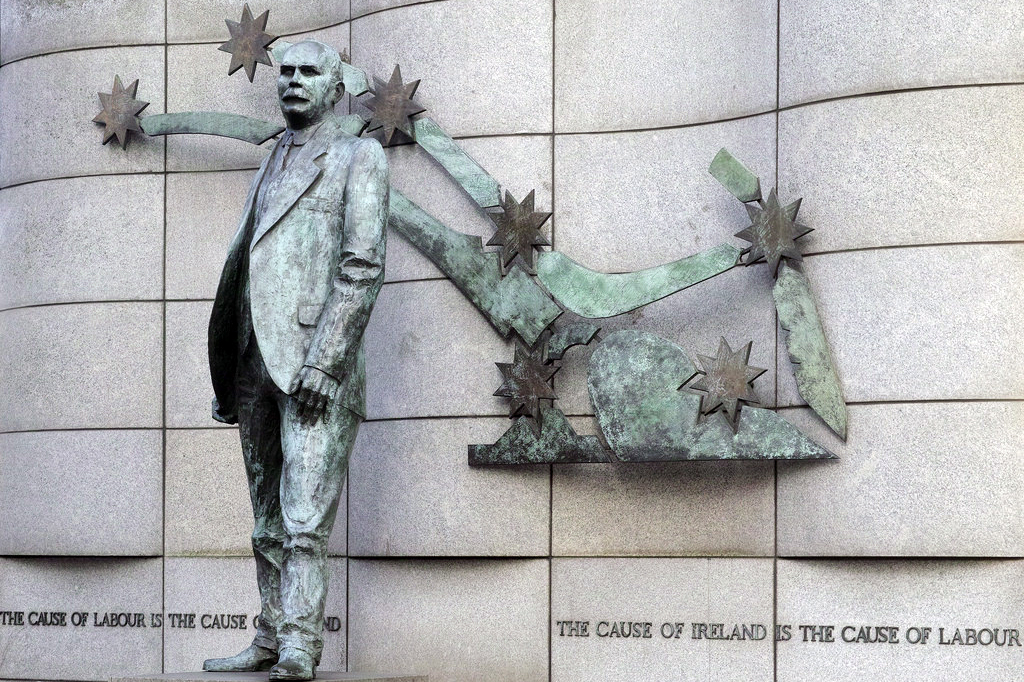 A German view on James Connolly

This article was published on The Pensive Quill on 8 August 2018.

In the past three or so years, hundreds of books on almost all aspects of the 1916 rising have been published. It is hard to keep track of the wide range of topics and qualities. I doubt that anyone can read all those books. Certainly, one approach to handle the literature is to look at the more idiosyncratic titles published to commemorate the 1916 centenary.

One of these books is a small German language book by Priscilla and Thomas Metscher on James Connolly’s political thinking. What makes this book particularly interesting is that it provides a view of James Connolly and early 20th century Socialist Republicanism from outside Ireland. 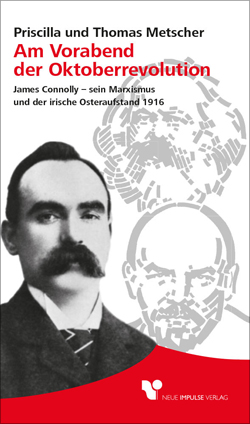 Moreover, the understanding of James Connolly is starkly underdeveloped – one could say, almost non-existing – in Germany and Austria. While a wide-range of Socialist and Marxist thinkers and activists got translated to German in the GDR, James Connolly never received this honour. Not even any of the numerous Maoist, Trotskyist, Anti-Revisionist, Titoist, or Hoxhaist splinters that saw the light of day in the 1970s ever embraced Connolly. It took the GDR state-publisher Dietz as long as 1975 to publish a small volume on Marx and Engels writings on Ireland entitled “Island in Revolt”.

In 1989, the conference proceedings “Ireland: Society and Culture” were edited by Doretha Siegmund-Schultze. The conference was held in September 1988, about two years before the end of the GDR. Thus, there is a reason to argue that this volume reflects the state of research on Ireland in the final days of the Eastern Germany academy. Notably, not even one of the 29 contributions deals with James Connolly! The authors of the new book on Connolly, Priscilla and Thomas Metscher themselves devote chapters on Mary Ann McCracken and the United Irishmen revolution, respectively. In short, Helga Woggon’s academic tome “Integrative Socialism and National Liberation”, published in 1990, remains the only German-language publication on James Connolly.

Although Irish history and the conflict have occasionally attracted interest among German readers, Connolly remains a largely unknown figure. While anti-imperialist solidarity has a long tradition in Germany, Connolly is not among the read authors of national liberation and anti-imperialism in Germany, while the writings of Roger Casement, Bobby Sands, and even Gerry Adams are all available in German.

Under those circumstances, the book by Priscilla and Thomas Metscher is a welcome addition to the German literature on Ireland. The book is a translation from English based on Thomas Metschers’ papers delivered on the topic to conferences in Dublin and Havana in 2001 and 2002. This makes the bulk of 80 pages. It is accompanied by a short introduction on the volume and James Connolly by the translators and a 25 pages chapter on the political life of Connolly by Priscilla Metscher. In addition, five of Connolly writings, “Socialism and Nationalism”, “The Boer War”, “Labor, Nationality and Religion”, “A Continental Revolution”, and “On Women” are – some of them for the first time – translated into German and included as an appendix.

The whole book has 150 pages. Unfortunately, rather than providing an in-depth introduction and analyses to Connolly’s writings, Thomas Metscher devotes over 30 pages to an introduction to his own interpretation of the principles of Marxism and Historical Materialism. This is followed by his interpretation of the concept of “integrative Marxism”. The terminology resembles Woggon’s “integrative Socialism” but Woggon is not referenced in the book.

The final part of Thomas’ contribution finally deals with Connolly himself. Here, he analyses central aspects of Connolly’s writings and political evolution. He attempts to interpret Connolly’s approach as “integrative Marxism” and portrays him, in accordance with Antonio Gramsci, as an “organic intellectual”. This part heavily relies on the writings of Lenin and Connolly. The quotes from Connolly’s writings are well-organised under several sub-headlines but more introduction and contextualisation would be helpful to guide the reader unfamiliar with Connolly through these texts.

There are certain originality and strength in explaining Connolly as an “organic intellectual”; by portraying Connolly as a Marxist thinker, however, oftentimes the author goes way over the top when presenting him as the greatest and most advances Marxist writer of his time – second only to Lenin himself.

Following Thomas’ introduction to Connolly’s writings, Priscilla introduces the political life of Connolly. In this final part of the book, she stresses Connolly’s rationale for uniting the Socialist and the Nationalist struggle in an Irish context. In this account lies the great strength of the small volume and this notion will be most interesting to German readers. This part should have, indeed, been printed as the primer to the book, for it introduces the readers not familiar with Irish Republicanism and Socialism in the early 20th century to Connolly and his political life. Thomas is not always able to do this, and readers of his part will feel thrown into excerpts of Connolly’s writings without being given sufficient context.

I read this book in parallel with Priscilla’s contribution to “A Festschrift for Anthony Coughlan” (Iontas Press, 2018). In this chapter, she compares the Desmond Greaves biographies of Connolly and Liam Mellows. As the book on Connolly under review, her chapter on “Desmond Greaves, Marxist Historian” deserves a wide readership.

In sum, taken both parts by Thomas and Priscilla Metscher together, this book is a welcome addition to the German debate on anti-colonialism and on Ireland. It will introduce German readers, students and activists alike, to the life and thinking of one of the most influential European revolutionaries of the 20th century. The easily accessible language and the price of 12.80, – should guarantee a wide readership of this book.