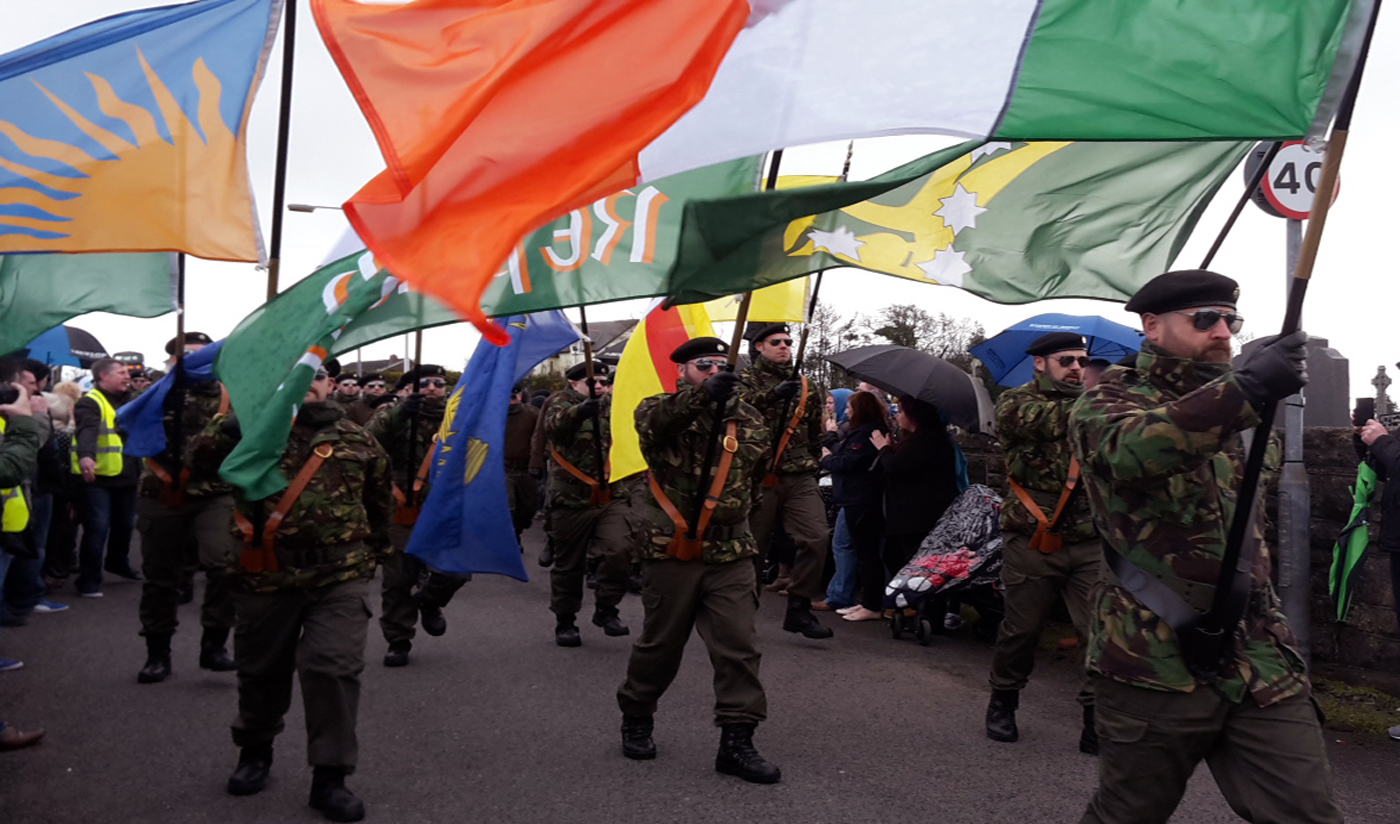 Coalisland 2016: A Blow Against Normalisation

This year marks the centenary of the Easter Rising in Ireland. Over Easter, hundreds of commemorations were held throughout the island. International media outlets reported lengthy from the official State commemorations on O’Connell Street in Dublin. However, the arguably most significant commemoration took place in a small town in rural Tyrone, Coalisland. The Coalisland parade struck certainly a blow to “normalisation” in Ireland.

Easter is a very special date in the Irish calendar. That is not only the case for religious reasons. At Easter 1916, a small group of militant Nationalists and Republicans of, among others, the Irish Volunteers and the Irish Citizens’ Army launched an insurrection against their colonial power Britain. In front of the General Post Office, that served as headquarter for the rebels, they proclaimed the Irish Republic. Although defeated within a week, the Rising marked a cornerstone towards independence. What was to become was a landslide victory of Sinn Féin at the elections in 1918, a War of Independence with Britain, the partition of the island, the independence of the southern 26 Counties, and a bloody Civil War.

The official State commemoration to mark the centenary was held in Dublin on Easter Sunday. Writers and commentators such as Ruth Dudley Edwards writing in the Belfast Telegraph and Henry McDonald in the News Letter both praised the “very fitting” tribute and “the sensitive handling of the celebrations.” The official programme marking the Easter Rising and the Decade of Centenaries by the Irish State is merely the most prominent among of a wide-ranging programme of events from various organisations.

Apart from the official commemorative events, there are the various Republican commemorations. Annually, Republican organisations, the National Graves Association, and Sinn Féin are holding hundreds of commemorations and smaller events through the island. The biggest commemoration is usually held on the Falls Road in West Belfast. The march, which is organised by National Graves Association Belfast/Sinn Féin, attracts more than 10-15.000 people. A huge number of the spectators are tourists. The spectacle repeats itself every year. However, this year was different.

On Easter Sunday, the second biggest parade in the North of Ireland was held independent of Sinn Féin. About 3-4.000 people, some participants even estimated the attendance with 5.000, marched from Clonoe Chapel to the town centre of Coalisland. Coalisland is a small town with a population of 5.000, and it is a historic place. On 24 August 1968, the first civil rights march was held from Coalisland to Dungannon.

The Republican parade on Easter Sunday was also significant. At 3pm, a huge crowed assembled at the carpark of Clonoe Chapel. The march was organised by the National Republican Commemoration Committee under the title “Unfinished Revolution.” Although the group had to brave windy, rainy, and cold weather conditions for an hour, no one departed. “We are still waiting for a band,” the organisers said. Indeed, a group of up to 80 women and men dressed in paramilitary uniforms was held back by the Northern Irish police service, PSNI, and hindered them to attend the parade. When the group finally formed up, cheers and a round of applause from those in attendance greeted them. By including women and men in paramilitary uniforms in the parade, the organisers clearly breached the orders of the Parades Commission that stated, “No military display.” 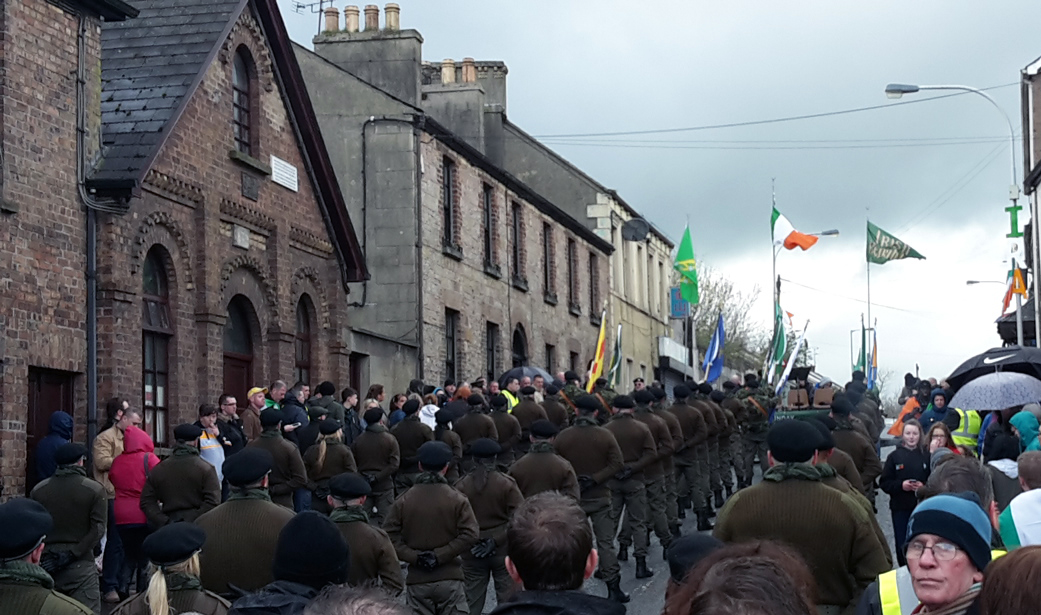 Among the thousands of participants were some well-known Republicans, such as Mandy Duffy, sister-in-law of Colin Duffy, Hooded men Kevin Hannaway, former Republican prisoner Brian Shivers, or independent Councillor Gary Donnelly from Derry. On the following day, the front-page of the News Letter read “An island divided,” contrasting a photo of the official commemoration ceremony in Dublin with the militant display in Coalisland. 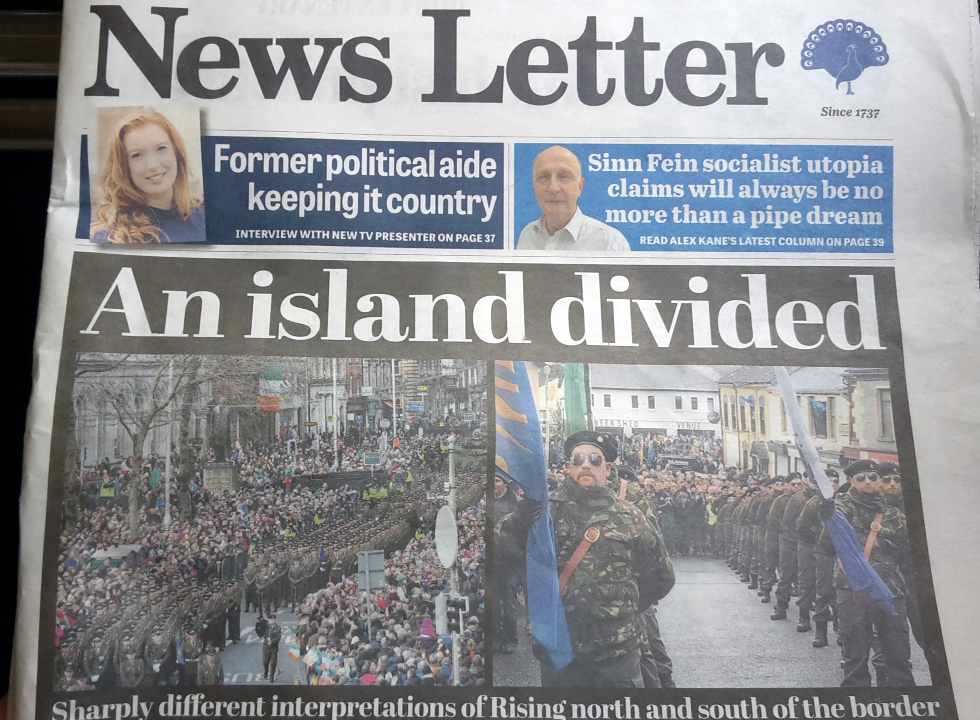 The parade in Coalisland was not an isolated incident. The day before, a masked group of women and men in paramilitary uniforms marched at the Republican Sinn Féin Easter commemoration in the Kilwilkee estate of Lurgan; militant displays were also visible at parades in North Belfast on Saturday and Derry on Monday. In Newry, around 500 people marched at an independent Easter commemoration on Saturday, and on Monday, a few thousand people attended the annual Tyrone National Graves Associations’ commemoration in Carrickmore.

The organisers of these parades are Republican groups who oppose the current settlement and the 1998-Good-Friday-Agreement. Hence, all these events were not only independent of but also in opposition to Sinn Féin, the main Nationalist party in the North. The organisers of these commemorations are usually referred to as “Dissident Irish Republicans,” a term strongly rejected by the activists of these groups themselves. Indeed, the terms “militant Republicans or “traditional Republicans” characterises them better. 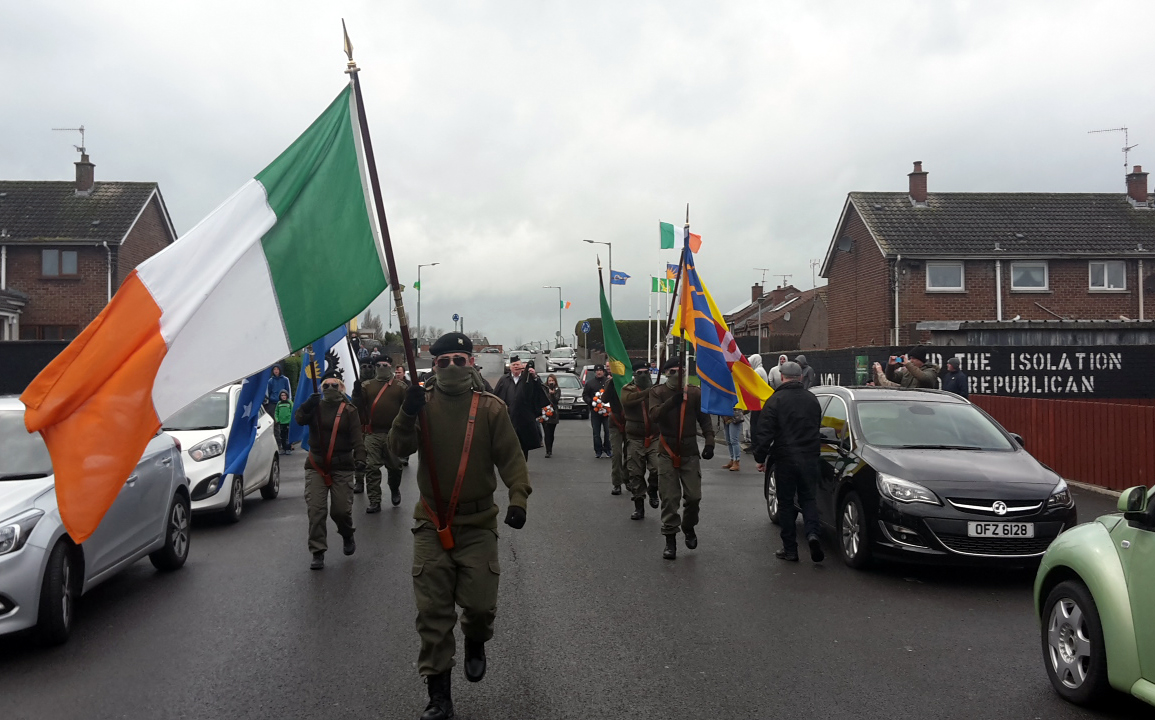 Commentators usually accuse these militant Republicans of, first, lack of support and, second, lack of politics. The first notion has been belied over the Easter weekend. Up to 5.000 people, marching behind an 80-strong group in paramilitary uniforms through a small town in rural Tyrone is a significant development 18 years after the signing of the Good Friday Agreement. Coalisland lies in a staunch Republican area that has been at the heart of the war throughout the 1970s, 80s, and 90s. That the second biggest Easter parade in the North was held independent of Sinn Féin is a further sign for the growing dissatisfaction with the current settlement among the Nationalist community, in particular in Republican strongholds. The current settlement, indeed, increased sectarianism, racism against migrants, youth unemployment, and economic stagnation. Therefore, I would disagree with Henry MacDonald, who commented in the Belfast Telegraph that the PSNI won the “propaganda war.” Instead, I would argue that the militant display in Coalisland was a propaganda coup for militant Republicans showing their growing support in Nationalist areas in the North.

The second notion is that these Republicans have no politics. Former Republican prisoner David Jordan gave the main oration at the commemoration in Coalisland. During the course of his speech, Jordan spoke about the need for a “political vehicle” to be established. He said:

Our overall objective must be to empower the Irish people using our revolutionary thinking to do so. (…) It is of the utmost importance that a strong vehicle is built. The vehicle must be ideologically united on radical socialist Republican objectives. It must be capable of formulating and implementing short-term and long-term objectives.

In the past, various attempts to establish such a vehicle failed and, therefore, more than half a dozen different groups exist. If the organisers of the parade in Coalisland succeed in closing this schism and establish a political force remains to be seen. For the moment, the Éire Nua programme, promoted by Republican Sinn Féin and recently by 1916-Societies National PRO Seán Bresnahan, remains the only political document outlining a long-term perspective for Ireland offered by militant Republicans. However, in the past 30 years, Éire Nua could not gain any significant support among Nationalists in the North. On the other hand, if militant Republicans succeed in providing a political alternative to those Nationalists who disapprove with the current settlement, it could be a game change in Northern Irish politics.

Researchers of militant Irish Republicanism focus on splits in the Republican Movement, and the counting of security alerts, punishment shootings, and lethal attacks to trace support for militant Republicanism. However, far from splits, prisoner numbers, and interviews with well-known spokespersons, a growing number of people from the Nationalist community in the North is prepared to show publicly their support for these groups. In other words, the previous years have certainly seen tectonic shifts within traditional Republican communities, in particularly in rural areas and small towns in Counties Tyrone and Armagh. If future research is able to grasp these developments remains to be seen.

What remains is the fact that around 4.000 people marched through a rural town centre in County Tyrone on Easter Sunday. Flanked by IRA-signs on lampposts and lead by an 80-strong group in paramilitary uniforms, all those in attendance were defying the order of the Parades Commission. This very fact is in itself a blow against normalisation in the North of Ireland. If the organisers of this parade succeed in their attempt to establish a “political vehicle,” academics might be forced to re-write the lessons of the Northern Irish conflict.