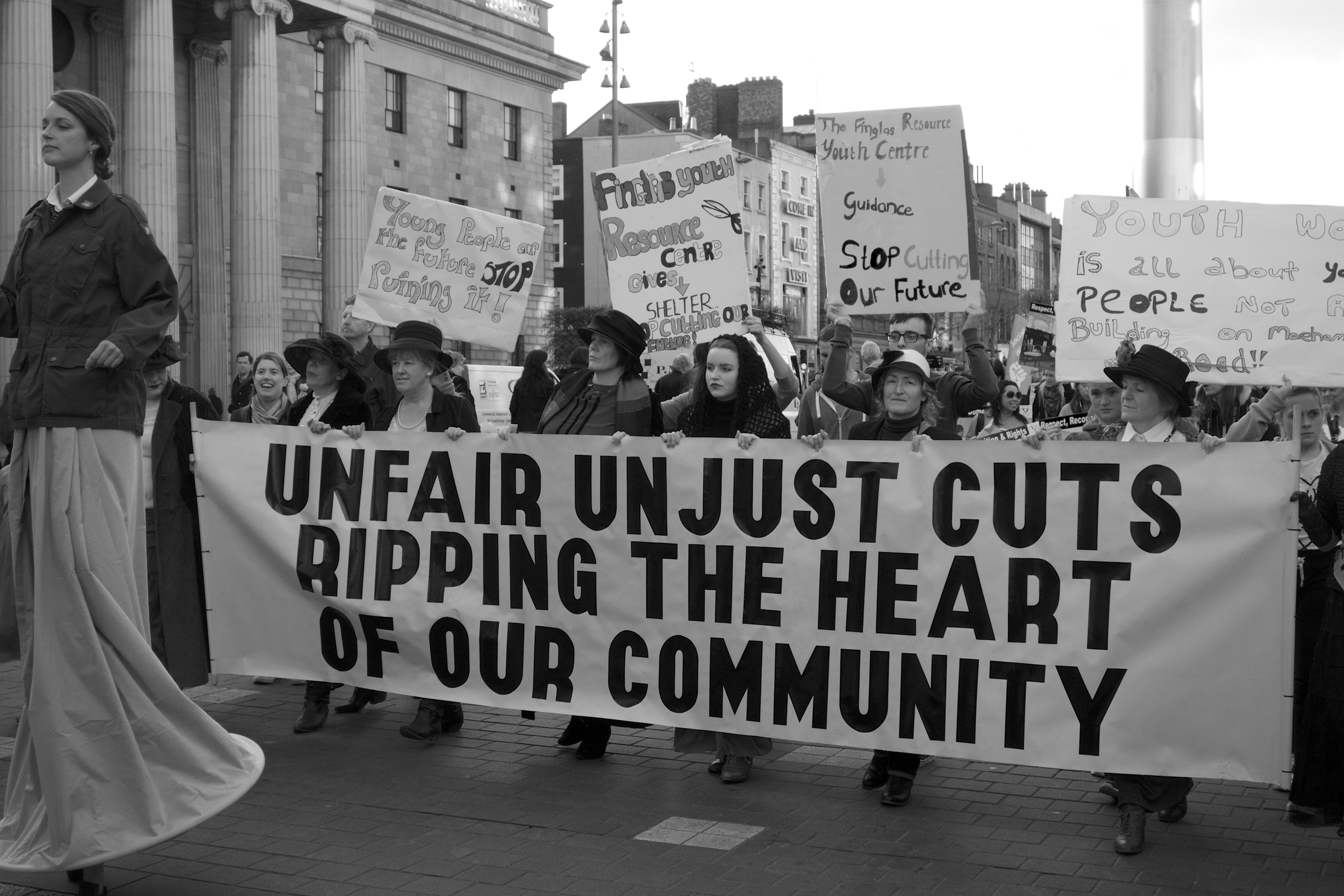 One of the main (academic) adventures that kept me from doing what I should actually be doing here in Florence, namely, writing my PhD Thesis, has just seen the light of day.  In the past twelve months, me, together with the General Editor Fiorenzo Fantaccini, took on a long and sometimes exhausting journey of editing the Monographic Section of Studi irlandesi number 7 on “Resistance in Modern Ireland.” It has been published by Firenze University Press.

Below, I will publish the introduction and acknowledgements of the journal. The full journal can be accessed here, downloaded as PDF here, or #OpenAccess on Cadmus. Enjoy!

The recent wave of Anti-Water-Charges protests, the refusal of meals by Republican prisoners in HMP Maghaberry, and the successful Gay-marriage campaign of early 2015 are but three examples of resistance to the status quo in Ireland. Throughout the history of medieval, early modern, modern, and contemporary Ireland, the island has witnessed various forms of resistance both to foreign interference and domestic situations. It is a famous and overused illustration of modern Irish history that “since the Society of United Irishmen in 1798, in every generation, a section of the Irish people resisted British rule.”[1] Robert W. White quotes an Irish Republican saying: “There has never been a period of peace in Ireland.” (2017, 3) The 1916 Proclamation of the Irish Republic states that “[i]n every generation the Irish people have asserted their right to national freedom and sovereignty; six times during the past three hundred years they have asserted it in arms.” (Lyons 1973, 369) While this notion is true, it is too simplistic to narrow Irish history and resistance within Irish society to militant, Republican uprisings. Even at the dawn of the Northern Ireland conflict, Ed Moloney argues, “[t]o say, however, that violent republicanism was the predominant sentiment among Northern Ireland’s Catholics would be wrong.” (2007, 37) Resistance in Ireland indeed reaches indeed far beyond the Republican paramilitaries’ use of arms. Thus, Joseph Ruane argues that the “long history of conflict” started with the 1570s colonisations of Ireland by English and Scottish settlers. (2014, 167)

The concept of resistance has attracted the attention of researchers in several academic fields. As diverse as the forms of resistance takes, so are its definitions; as diverse as the sources to research resistance are so its interpretations; and as diverse as the causes of resistance so are its actors. Hence, “resistance constitutes a dynamic phenomenon that can occur at multiple levels and can take multiple forms”. (Courpasson and Vallas 2016, 7) To be sure, resistance can be understood as defensive demeanour, as well as insubordination and offensive opposition against rules and the status quo in general. The field of law, for example, perceives it as obstruction and civil disorder. Social Sciences describe it as an action intended to diminish the effects of another action, while Political Sciences interpret those actions of a particular group as resistances which are directed against authorities, rules, or governments. Psychology, furthermore, understands resistance as a principled distaste of any rules, orders, or norms. In fact, the essays collected in this monographic section all deal with forms of cultural resistance. Stephen Duncombe describes cultural resistance as following: “[T]o describe culture that is used, consciously or unconsciously, effectively or not, to resist and/or change the dominant political economic and/or social structure. But cultural resistance, too, can mean many things and take on many forms.” (2002, 5)

All of the above meanings and forms of resistance are reflected in Irish society through the Republican and Loyalist movements, the prison protests in the 19th and 20th centuries, social and workers’ struggles, the 1913-lockout, the Belfast Outdoor Relief Strike of 1932, the Home Rule campaign, the Limerick Soviet, the 1960s Civil Rights Movement, the recent Anti-Water-Charges protests, the LGBTQ rights movement, the suffragettes, the Land League, the fight for women’s liberation and abortion rights, but also through culture, music, literature, film, and theatre in the last 250 years.

This monographic section of Studi irlandesi serves to provide a wide selection of different forms and interpretations of resistance in Irish history and culture. This is merely a humble effort to provide insight into several case studies of modern Irish resistance. For this special issue, we were looking for papers that examine the various forms and interpretations of resistance in Irish history and society since the late 18th century. We received a wide range of thematic topics, covering many disciplines and periods of modern Ireland. A selection of these proposals is published in this edition. The contributions range from an analysis of non-violent resistance in the work of Samuel Beckett, and political Folk music in contemporary Republicanism, to an examination of the LGBTQ equal rights movement and one of Ireland’s most recent social movement, the Occupy movement.

As the selection of the articles reflects, our research of resistance in Ireland is an All-Ireland approach. While Ireland was divided into two separate states, the Republic of Ireland in the south, and the British part, Northern Ireland, in 1922/3, developments in each of the two states cannot be understood in isolation from each other. To be sure, the post-colonial resistance in the Republic of Ireland is due to its share history and politics, strongly interlinked with the colonial resistance in Northern Ireland. This becomes most obvious when the forms of resistance are Republican, as the articles of Seán Ó Cadlha and Robert White explain. However, the significant but all too often neglected forms of both non-Republican and non-violent resistance analysed by Patrick James McDonagh and Frédéric Royall are two separate case studies on social movements in the Republic of Ireland. Contrary to these forms of resistance, the contributions by Rosa Gilbert, Tracey Iceton, and Laurence McKeown put their geographical focus North of the Irish border. Additionally, Keith Hopper and Neil Murphy, Molly Ferguson, and José Francisco Fernandez write about forms of resistance in contemporary Irish literature and theatre.

The first essay of the monographic section on “Resistance in Modern Ireland” takes the readers to the emerging conflict in the North of Ireland. Rosa Gilbert analyses the popular campaign which was initiated in response to the re-introduction of internment without trial in summer 1971, while Robert W. White writes about the contemporary Irish Republicans and multi-method approach to the dynamics of “resistance” in Ireland. Patrick McDonagh takes us away from the anti-colonial conflict in the North to the struggle for LGBTQ rights between the 1970s and 1990s in the Republic of Ireland; similarly, Frédéric Royall looks at the recent mobilisation cycle of Occupy in Ireland. It is Seán Ó Cadha who brings us back to Irish Republicanism: his essay on death, immortality, and the Otherworld in modern Irish Republican ballads introduces the contributions on cultural studies. Molly Ferguson focuses on clown techniques in devised theatre pieces by Charlie O’Neill and Brian Fleming, claiming those strategies as an emergent category of human rights activism in Irish theatre. José Francisco Fernández explores Samuel Beckett’s Catastrophe effectiveness of advocating the idea of non-violent resistance by setting it in the context of Beckett’s complex relation with Irish history. The final essay of the first part of the section is written by Keith Hopper and Neil Murphy who offer a detailed analysis of how Dermot Healy’s Fighting with Shadows exemplifies acts of resistance while seeking to engage with Healy’s provincial Irish context.

The second part is amalgamated of two contributions. First, Tracey Iceton provides a fictional account of the experience of being a woman in the Provisional IRA, based on extensive reading on women in the Northern Ireland conflict. The second contribution contains the transcript of an interview with former IRA member and hunger striker turned academic and play writer, Laurence McKeown. The interview was conducted by Alexander Etkind and me, Dieter Reinisch, during the conference ”Irish Society, History, and Culture: 100 years after the Easter Rising”, held in Florence in October 2016, co-hosted by Lorenzo Bosi (SNS), the General Editor of Studi irlandesi, Fiorenzo Fantaccini (UniFi), and me, Dieter Reinisch (EUI).[2] Indeed, the conference and the publication of this issue of Studi irlandesi s the results of an intensive collaboration in the field of modern Irish history of various institutions and scholars in Florence during the past two years: the contributions of Rosa Gilbert, Robert W. White, Patrick McDonagh, and Frédéric Royall are, in fact,  based on papers they previously presented at the “Irish Society, History, and Culture” conference in October 2016. I want to use this opportunity to thank again all those who made the organisation of this conference possible, in particular, Pieter Judson for the Department of History and Civilization, and Brigid Laffan for the Robert Schuman Centre for Advanced Studies, both from the European University Institute.

As an addition to the contributions in these two parts of the journal and in line with the general topic of “Resistance in Modern Ireland”, Gianluca de Fazio reviews Lorenzo Bosi’s Italian-language book on Provisional IRA members, while Kaan Orhon reviews a German-language Oral History study on women in the Provisional IRA and Cumann na mBan. Finally, I want to thank everyone who made the publication of this monographic section possible, in particular, the General Editor Fiorenzo Fantaccini, Journal Manager Arianna Antonielli, and all the anonymous reviewers.

White, R.F. (2017), Out of the Ashes. An Oral History of the Provisional Irish Republican Movement, Newbridge, Merrion Press.