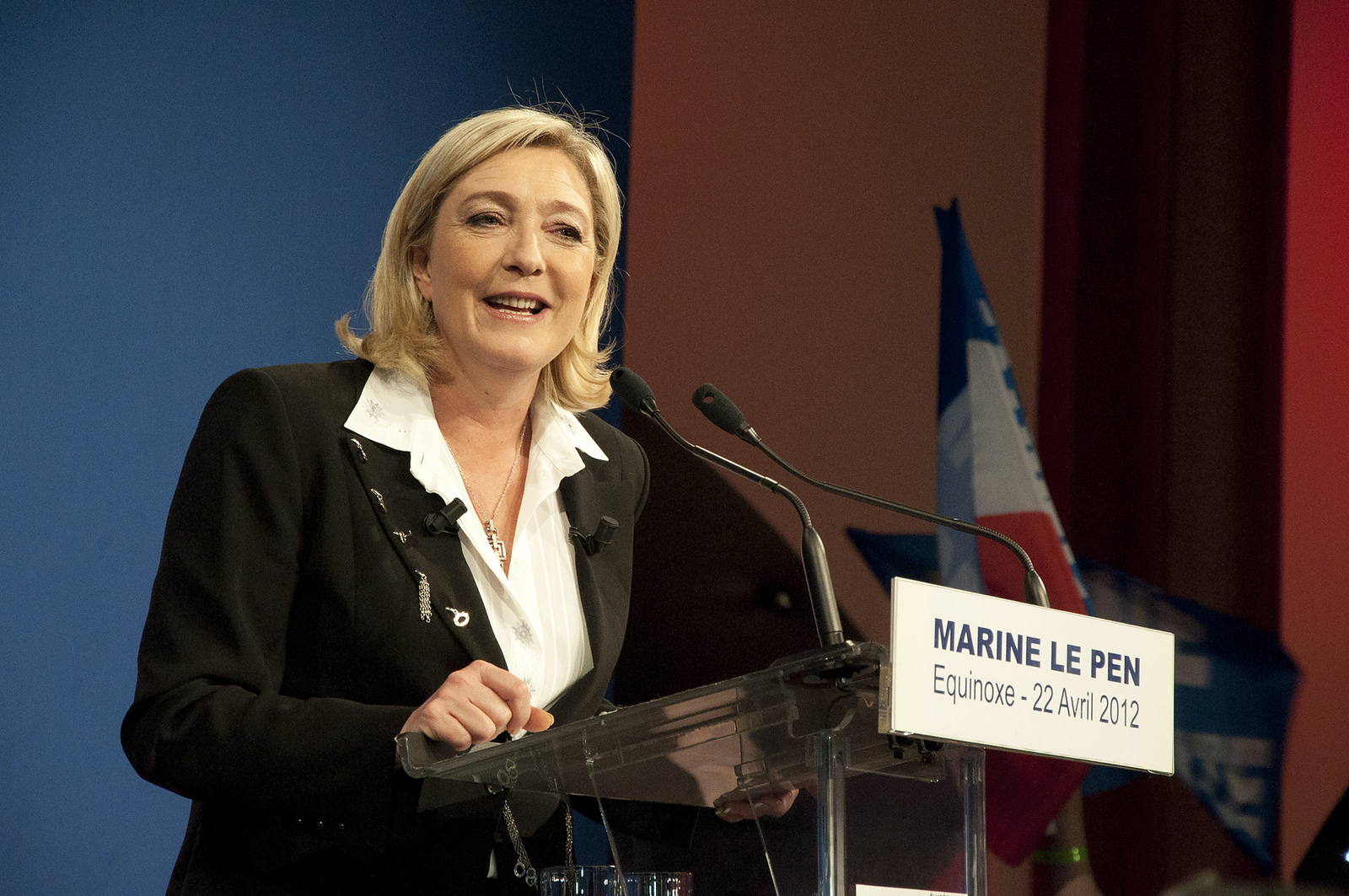 Radical right? Populist right? Extreme right? Or even populist Radical right? There is an academic debate on the nomenclature of this electorally growing party family in Europe. Each of these concepts is supposed to reflect a slightly different conception of the ideology of these parties. However, this discussion can be considered to be partly sterile since there is a consensus on which parties are classified as such. No what matter how we label them, the common opinion is that parties such as the French Front National, the Dutch PVV or the Austrian FPÖ are radical/extreme/populist right wing parties. Less attention has been given to describing fully their right wing positions – or at least in some policy areas.

Since we know who they are, the more important question is to understand what they are. And more precisely, what they truly stand for?

Nationalist and exclusionary positions, cultural authoritarianism and their notable rejection of immigration unite radical right parties in a coherent party family. These common features undoubtedly categorise these parties at the right end of the political spectrum. Looking at the economic agendas of this party family the picture is far from being this clear.

Academic literature has long lived under the assumption that populist radical right movements hold homogeneous right wing positions, in a more radical fashion than traditional right wing parties. In the 1980’s and 1990’s, the electoral success of these parties was explained through a “magic formula”: radical right parties were proponent of cultural authoritarianism (anti-immigration, partisan of law and order, conservative values) and neoliberal market politics. This combination of positions proved to be fruitful for radical right parties: they won large share of the votes and in some cases made it into government coalitions. However, Herbert Kitschelt, who pinpointed this formula, admitted that it was historically grounded to that period. Nowadays, it is indeed hard to argue that all European radical right parties are champions of neoliberal economic policies. On the contrary, some of them are even fiercely opposed to the globalisation of the economy and are using left wing rhetoric when dealing with economic problems.

The French Front National is a striking example of this economic shift; and it is even symbolised by the change of leader. In the 1980’s, Jean-Marie Le Pen claimed he was inspired by Ronald Reagan’s economic policy. Today, his daughter Marine Le Pen took over the party and she draws heavily on the left regarding economic policies. Nowadays, the Front National wants to re-build a “strong state” and protect public services “that have been decimated by privatisation and three decades of ultraliberal politics”. Even further, the manifesto of the Front National now clearly stands for maintaining the35-hour working week (a symbolic reform of the left), higher taxes for the wealthiest and the return the lowering of the full retirement age. The party claims its ambition to defend and improve social security. The following graph shows how dramatically the FN has changed its positions on the economy. The part of their manifesto devoted to “welfare expansion” in the 1980’s was virtually zero. In 2012, it approximates 15% of their total proposals, reaching a similar level to that of… the Socialist Party (PS). 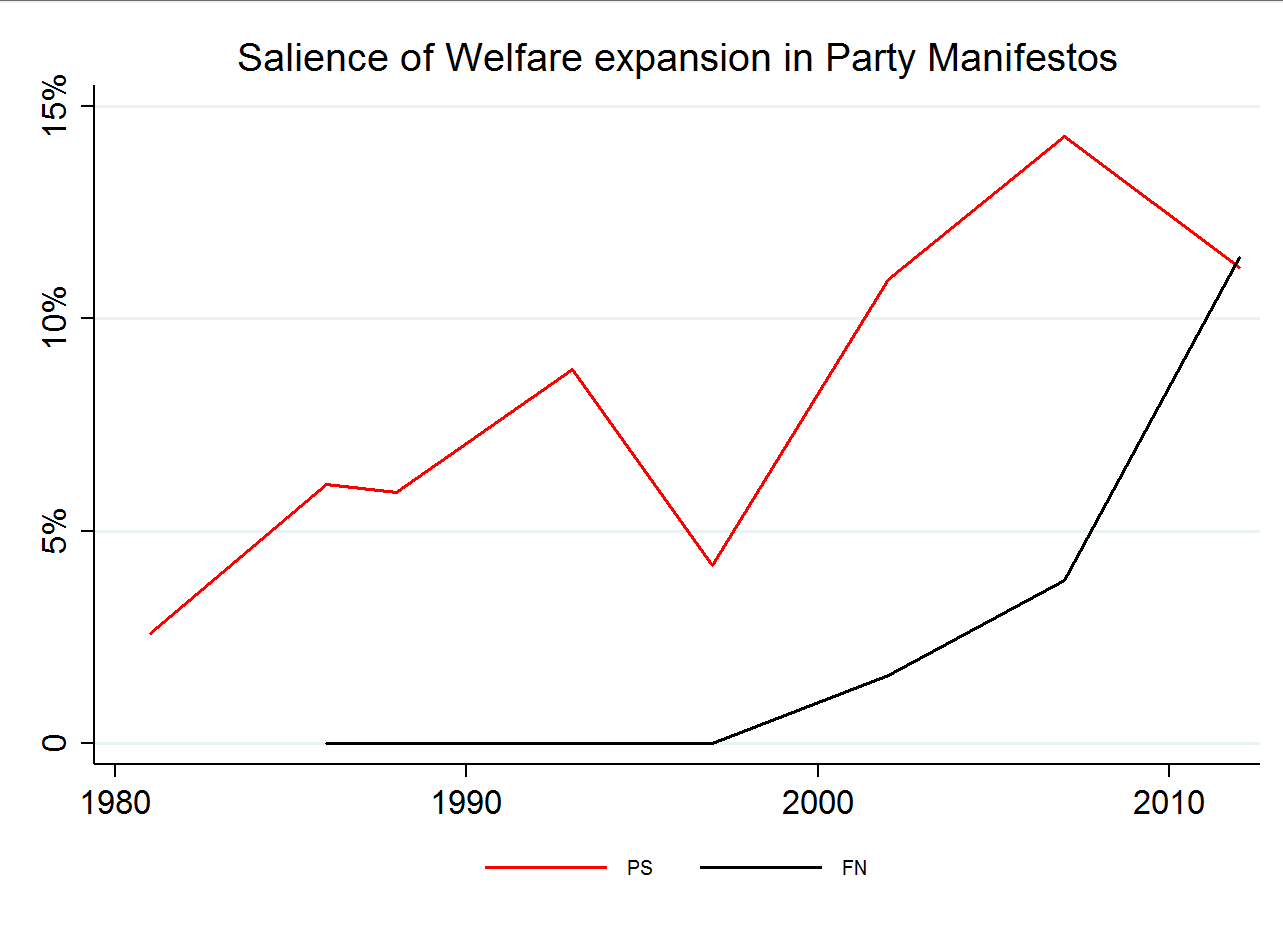 Thus radical right parties are not situated on the very right side of the political spectrum on all issues. However, they are far from being located on the left, even when only looking at economic policies.
First, not every radical right party in Europe has followed this trend. The Swiss SVP for instance – largest electoral force in the country – still argues strongly for neoliberal economic policies and favours a welfare state based on individual self-reliance. Second, being a proponent of welfare redistribution does not necessarily imply defending left wing politics. The radical right parties that favour the expansion of welfare benefits do it in a very exclusionary fashion. They defend the “natives’ rights” only, and systematically want to exclude scapegoats from these social schemes (immigrants, minorities, or other social subgroups). This contradicts radically the historical inclusive dimension of social welfare as promoted by the left in Western Europe.

Radical “right” parties do not form an ideologically homogeneous party family; what they share is a common function within the party systems. The discussion on the labelling of these parties should therefore focus less on on adjectives (extreme/populist/radical) on more on their position in the political spectrum.