Political scientists are usually careful when establishing general rules and mechanisms. Yet, Duverger’s law spells out the mechanical relation between
electoral systems and party systems. To put the well-known principle briefly: proportional electoral systems foster multi-party systems whereas plurality systems (majoritarian) give rise to two-party systems. More than 50 years after it was formulated, Duverger’s law applies; except in the country of Maurice Duverger himself. Indeed, the regional elections of 2015 have confirmed the ongoing transformation of the political system: France – although it has a majoritarian system – is a tri-polar country.

The victory of the Front National was much expected in these local elections. In the first round of the elections, they came first in 6 out of 13 of the metropolitan regions. Notably, the two lists led by Le Pen family members reached more than 40%. These regional elections are also significant for two reasons, which will probably have long-lasting effects on the French political system. First, for the first time, the Front National seems to be in good position to win large-scale local governments. The second round of December 13th will determine if the radical right party can actually access power in massive regions that are representative of the country as a whole. Second, these elections consecrate the tripolarization of the French partisan system and therefore disprove Duverger’s law.

First round of the 2015 regional elections in France 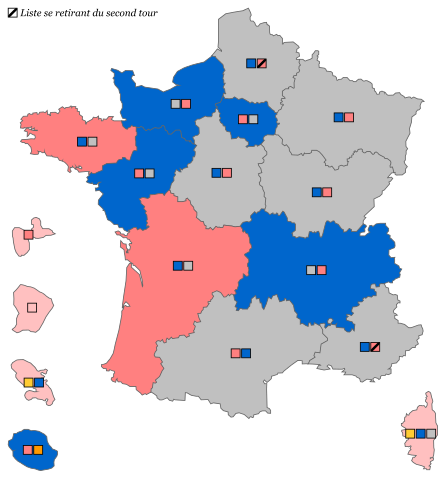 For long, the Front National gained his strongest electoral successes – conquering some local administrations – in regions where the national party system was deficiently represented. This is striking in the most Northern region of France, where the right is historically low, especially in the localities where the FN is over- performing. Conversely, in the Provence, the left has almost disappeared over the last 20 years. The Front National was the most successful where the traditional “two-blocks” party system was collapsing. Incidentally, these are the regions in which Marine Le Pen and Marion Maréchal-Le Pen  have gained more than 40% of the votes on December 6th. However, the 2015 elections show that the transformation of the French Party system – that was ongoing since the presidential election of 2012 – is achieved. At the National level, three blocks are of relatively equal importance: Front National (28%), Parti Socialiste (23%) and Républicains and allies (27%). In every regions, these three parties make up for at least three quarters of the votes; averaging at 79% of expressed ballots. Even more, the Front National now reaches about 20% of the votes in region that historically stayed unaffected by its electoral gains (Western France).

Yet, as Duverger predicted majoritarian electoral systems produce bipolar systems. Even with the flexible rules of local elections, which allows for more than two parties in the runoff, one of the three blocks will be crushed by the electoral system. For many years, the FN could not win plurality elections, and the party has an incredibly low number of elected officials compared to its electoral weight. However, tables are turning. The left has retrieved its candidates from at least two regions where the FN can win, and will therefore not be represented in the local assemblies. The 2015 regional elections also show how the mainstream right is isolated, reaching about 30% in the first round but with almost no electoral reserves to compete in the second turn.

In a majoritarian system, it still takes two to tango, but a trio cannot dance. These elections set the tone for the 2017 presidential election: if the Front National keeps its electoral momentum and qualifies for the run-off, all chances are than one of the traditional blocks will suffer severe and life-threatening consequences.