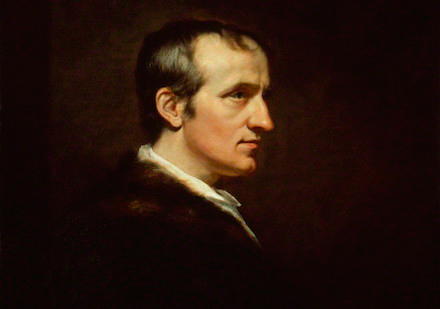 Before coming to the EUI, I studied Political Science at McGill University, and the History of Political Thought at the University of Exeter. Over time I became interested in the history of anarchist thought, which naturally brought me to William Godwin (pictured*). Since then, there has not been a day when I have not dealt with his thought and works.

Accordingly, my dissertation supervised by Ann Thomson (with Stéphane Van Damme as second reader, and Pamela Clemit as external advisor) and funded by the Swedish Research Council, explores the connections between Godwin’s children’s books and his broader thought, in the context of his commercial endeavour, the Juvenile Library. You can read more about my work on my Research Page, but feel free to drop a line as well.

In addition, I have taught early 20th century literary and cultural history with Joanna Bourke at Birkbeck College, London after having been a visiting scholar there. I was also a fellow of the Maison Française d’Oxford. My book reviews and articles have appeared in History of European Ideas, Krisis, and the European Review of History/Revue Européenne d’Histoire.

Outside of the academic world, I have been employed as a union worker and as a clerk and been involved with various student-run welfare initiatives such as the Walksafe service, or Voice.

In my free time, I play bass guitar in the EUI-based band Bourdieu Never Did This, and have been known to play electric guitar and fence foil.

*Portrait by James Northcote (1802). Courtesy of the National Portrait Gallery.