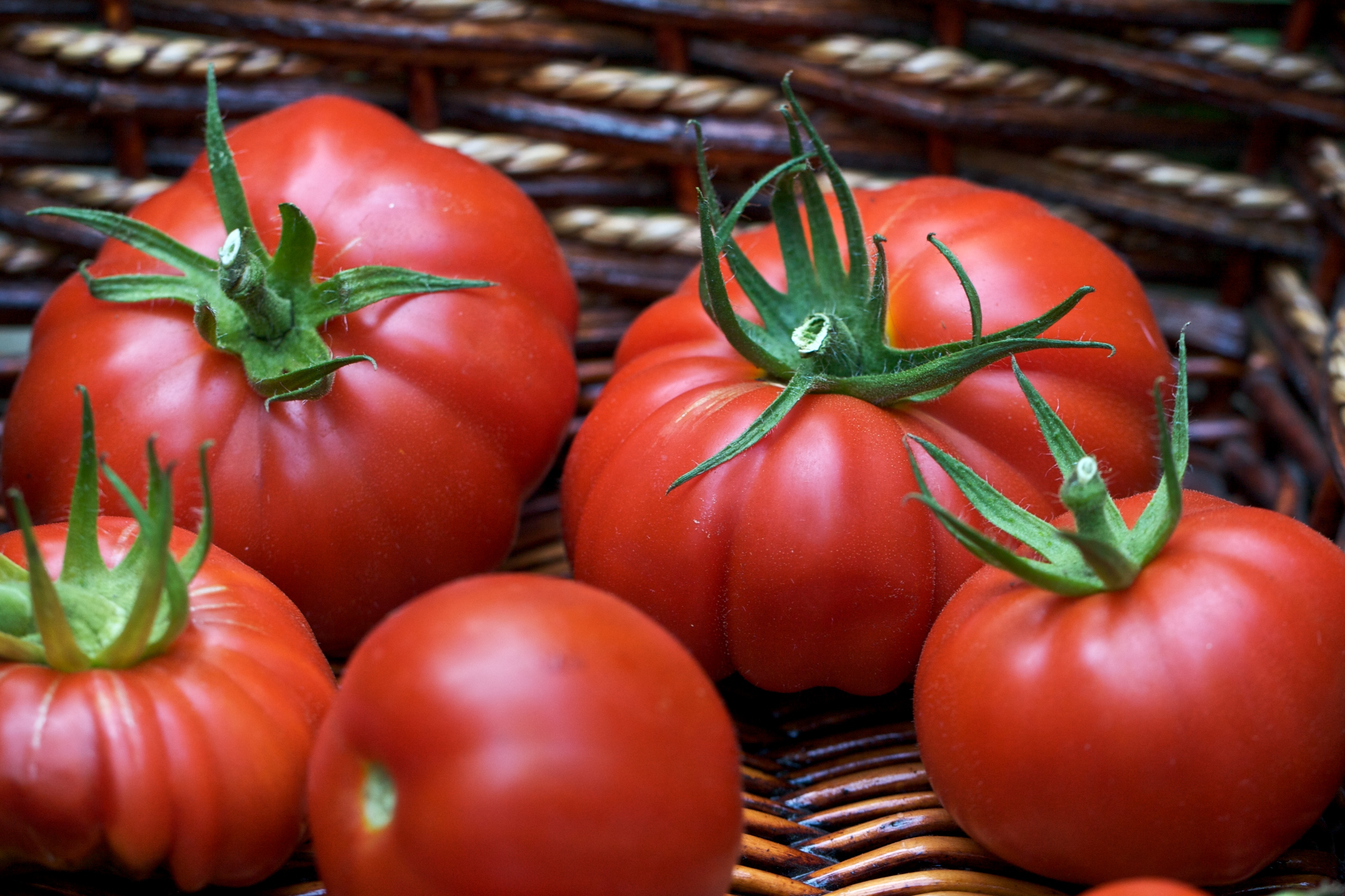 ‘Pomo-d’Oro’: Presence and Absence in the Political Iconography of Italy’s ‘Red Gold’

At the bottom of the tomato supply chain stand thousands of over-worked and underpaid African migrant workers. These are the guys who, every summer, bend double under the blazing Puglian sun to ensure that you and me enjoy our pastas, passatas, and tomato-based salsas. They come solely for the harvest, between August and September, work 12 hour days (if they can find the work), and earn no more than €3.50 for each massive cassone they fill.

Yet these guys are absent from the official iconography of the Italian tomato. Watch any passata commercial, go to any supermarket, visit any agro-industry website, and all you’ll see are pastoral images of (empty) fields, happy (mechanised) workers, or (fetishised) final-state products that betray no trace of the hand of labour. 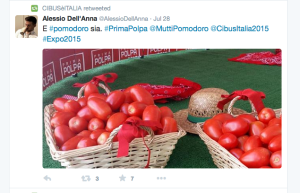 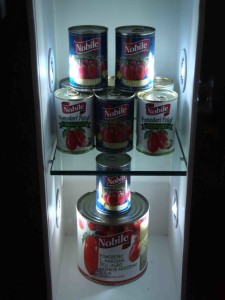 This absence reached its striking crescendo at the national glorification of agro-capital that was the Universal EXPO in Milan, which I just visited. 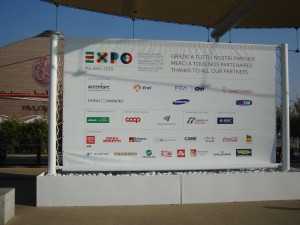 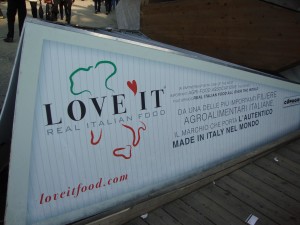 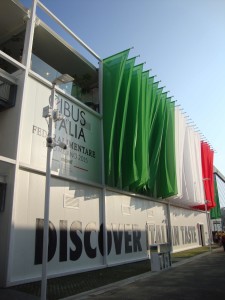 Its corporate-sponsored food pavilion promised to show ‘the excellence of food Made in Italy’, the ‘skill and values’ of Italian agricultural production, the supply-chain in all its efficient glory. In reality, it did nothing of the sort. For what it comprised was a series of promotional videos purveying an image of agro-industrial, socio-cultural harmony*.

Each video follows exactly the same progression, using the metaphor of the life-cycle to document the supply-chain journey ‘from field to fork’. The narratives began with the planting of the tomato seedling, moving through the harvest and the factory-setting of industrialised transformation, before ending at a dinner table. In the process, a hyper-organised system of production and accumulation is equated with the natural and the harmonious. What is evoked is a cross between the pastoral, the hyper-modern, and the traditional. Family values overladen with modern efficiency and timeless technique. Yet what is absent is precisely that which is most important – the workers. Not one video depicts the grimy difficulty of the tomato harvest; none feature a single black face. Marx’s commodity fetishism at its purest**.

So far, so normal. But this is not just another story of how nasty agro-capitalists instrumentalise their workers, wiping them from the scene. It’s also a story of how these workers are similarly instrumentalised by well-meaning civil society and labour unions. Because where capital pretends that those doing the dirty work don’t exist, civil society pretends that their work and the lives that they lead are far worse than they actually are.

How and why is this so? On the basis of my fieldwork with workers and civil society, it is simple, and dialectical. In order to counter both the hiding and the exploitation of these tomato harvest workers by tomato product selling companies, civil society over-emphasises both their presence and their abuse. It depicts them as living and working in near-feudal conditions, and it describes them as ‘reduced to slavery’ by evil caporale gangmasters.

There are two classic examples of this. The first is from an Italian news report called Piazza Pulita***. This is a current affairs programme that typically takes a more liberal, ‘human’ stance on stories such as illegal immigration or labour exploitation. It commonly features reporters ‘on site’ talking to or near the people concerned. It works to humanise, and also to criticise (absent) power figures. Yet in doing so, it draws heavily on standard techniques of media sensationalism.

This particular episode is facilitated and accompanied by important figures from Puglian civil society, particularly those engaged in the defence of migrant labourers. It moves between various labour ‘Ghettos’ and features sinister music, hushed commentary, sad workers describing their inhuman conditions. It’s all about the politics of pity. It mobilises tropes of innocence, the undeserving victim, material deprivation. The spectator’s sympathy is activated through a focus on the familiar – on living conditions, family, and sadness. Within the logic at work, suffering is ultimately redeeming.

Our second example comes from the massive civil society campaign, ‘Stop Caporalato’. ‘Stop Caporalato’ is an initiative organised by the agricultural branch of Italy’s largest labour union, CGiL, in alliance with all the major civil society bodies working on migrant rights. It builds on a long history of militant agricultural labour activism in the Italian South and draws on an established rhetoric. Its goal, according to senior figures involved in developing its strategy, has been twofold. First, a national law against gang labour brokerage (caporalato). Second, the promotion of ‘ethical agriculture’, to be achieved via shaming the major agro-capital firms or supermarket chains selling products produced using gang labour and ‘slavery’.

What’s the Problem and What to Do?

So what’s the problem here? There are two. Firstly, the image produced by Piazza Pulita and Stop Caporalato is profoundly liberal, and is part of a profoundly liberal strategy. It relies on discourses of extremity and individuality (on ‘slaves’ and ‘gang-masters’), and this works to reproduce the fundamentally liberal idea that deprivation and exploitation exist outside the structures of the market economy, rather than as an inevitable consequence of its inefficiencies and injustices. What does this mean? It means that the ‘good guys’ trying to help the ‘poor guys’ are actually doing the opposite – they are reinforcing the market economy by de-politicising it, and in so doing they are actually playing an unwittingly hegemonic role that helps the ‘bad guys’.

Secondly, and similarly importantly, the iconography of pity tends to actually alienate the migrant labourers it seeks to assist. It does this by mis-representing them as agency-less victims, by refusing to give them voice, and by presenting a simplified version of the messy complexities that characterise their lives. It thus precludes a more grounded politics of solidarity.

This was made abundantly clear during my recent fieldwork with migrant workers in the major informal ‘Ghetto’ settlement that many of them inhabit during the tomato harvest – Rignano Garganico. Most are a mixture of furious and incredulous. Of course they’re angry at the faraway companies making money on their underpaid backs. But their ire is far more readily directed at the civil society and union activists responsible for depicting them as ‘slaves’. Indeed, many are so annoyed that certain union figures are now personae non gratae, because they’re seen as promoting an image that serves to advance union careers, instead of helping the migrant workers whose (self-)image is being distorted.

Because the reality is this: no-one in the Ghetto considers himself a slave, no one wants to be pitied, and all wish to see the dignity of their labour recognised and respected. Life in the Ghetto and during the tomato harvest is hard, but for most it is better than the lonely, unemployed alternative elsewhere in Italy. The tomato harvest at least gives them the chance to earn some money, and to do so in the company of friends. It affords them the chance to spend a couple of months away from the racist gaze of urban Italia, and amidst a certain kind of solidarity.

So what do they want? Papers, good jobs, the freedom to self-organise beyond external interventions. By all means, civil society should draw attention to injustice – but it has to do so in systemic fashion, critiquing the whole system of which the exploitation of these guys is merely a part. At the same time, civil society should approach these workers and ask what they think they need. They’ll tell you many basic things – better sanitation and waste disposal in the Ghetto, a bus service linking them to the town, support setting up credit unions. In other words, things that will improve their conditions, rather than making things worse for them by taking away the Ghetto and the harvest jobs that are their only alternative.

What does all this tell us? It tells us that the politics of pity is limited. Of course, agro-capital is culpable, like all corporate capital, of making its riches through surplus extraction, through hiding the dirty work that poor workers do under the radar. But an emancipatory strategy premised on pity and shame, that uses the language of slavery or gangmaster, is not the way forward. It angers people who wish to see their humanity acknowledged. It angers them because it denies them a voice; because it runs the risk of inviting the intervention of meddling outsiders; and because it uses them for means that are not their own. What is necessary is the development of a strategy with these exploited workers, building from their base, in their interests.

* If I knew how to get one of my own videos in here that was less than 1MB (the limit for this WordPress), I would. This, however, from Mutti Pomodoro’s Youtube channel, captures exactly what I mean. It almost makes the tomato seem sexy.

** In Volume One of Capital, Marx famously bemoaned the ‘mystery of commodities, the magic and necromancy that surrounds the products of labour’. ‘This finished form of the world of commodities’, he complained, ‘conceals the social character of private labour and the social relations between the individual workers’. It hides the materiality of lived labour (with)in the commodity form and (with)in that commodity’s marketing and exchange. The worker’s presence is subsumed and it is only what Derrida would call her ‘trace’ that remains. The iconography of the Italian tomato is a paradigmatic example of this process. Its images erase the worker whose labour holds up the entire supply-chain. They veil and mystify the grit, grime and graft of production, hiding it both within the final-form commodity of the tomato and behind its ‘Made in Italy’ branding. Given how important ‘values’ are as well as ‘quality’ to the wider Made in Italy brand, it is fair to suggest that such mystification is necessary for the maintenance of capital trading on Made in Italy itself.

*** I did not know how to embed this video, which is why I’ve had to hyperlink.