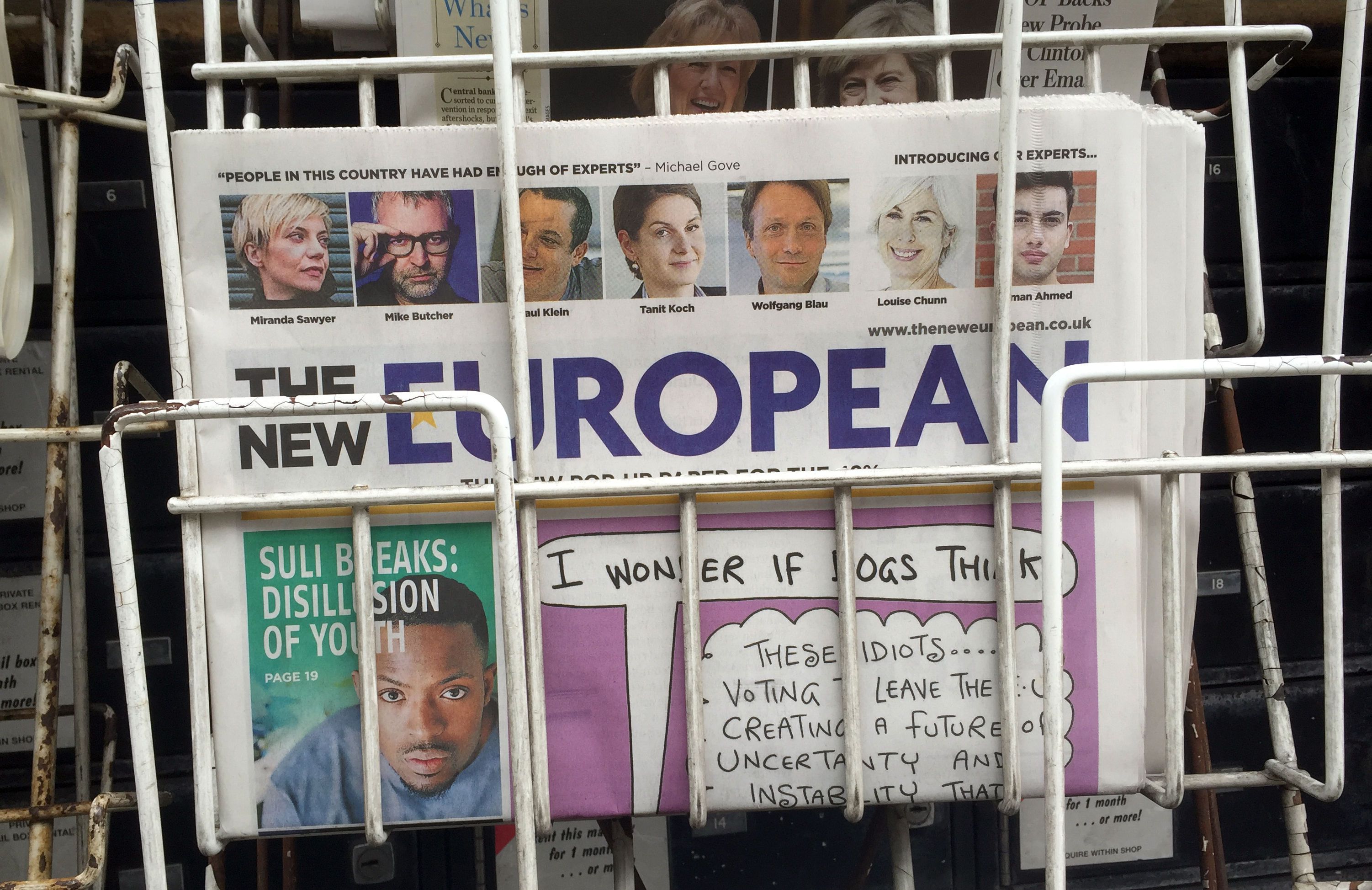 In The Crisis of the European Union: A Response, Jürgen Habermas argues that the European media must contribute to a greater sense of civic solidarity: “The trans-nationalisation of the existing national publics does not require any different new media, but instead a different practice on the part of the existing media. They must not only thematise and address European issues as such, but must at the same time report on the political positions and controversies evoked by the same topics in other Member States”. In the wake of the United Kingdom’s vote to leave the European Union, ‘different news media’ has in fact arisen through the self-described “pop-up paper” The New European. This post considers whether the paper could, in accordance with Habermas’ call for action, contribute to a phoenix-esque rising of a new sense of European identity from the ashes of the Brexit vote.
Gareth Davies has argued that the passion shown by remain voters after the result of the referendum is a sign of success of the identity building project of European Union: “Whatever else has happened, a new community of committed Europeans was born last week (after the 23 June)”. The New European was also born out of this environment; it proclaims on the cover of its August 5-August 11 edition that it is “Carrying the torch for the 48%”.  This theme of pushback against the referendum result is also evident in the expert contributions within the first issues: former Downing Street Press Secretary Alastair Campbell argues for a second referendum; former British Deputy Prime Minister Nick Clegg writes on the ‘phony peace’ before the true upheaval of Brexit; and philosopher AC Grayling argues that Parliament must not trigger Article 50. On first viewing, therefore, The New European appears to be little more than a protesting voice for those who have lost out in the democratic procedure of the referendum: a far cry from Habermas’ calls for a fundamental trans-nationalisation of media practice in Europe.

However, if one delves into the paper beyond these blockbuster contributions in the ‘Expertise’ section – and the condescending discourse towards leave voters that is channeled through a cartoon dog – then the green shoots of such a new practice can be detected. In the ‘Agenda’ section of the paper, there is a side-panel with paragraph-length stories from different European countries. These stories are completely unconnected to any backlash to the referendum result in the United Kingdom: for example, in the August 5-11 edition, a reader can learn that a square in the Romanian city of Curtea de Arges, Romania will be renamed after the recently deceased Queen Anne, that a court ruling in Groningen, the Netherlands means that Pastafarians will no longer be able to wear colanders in their heads whilst taking ID photographs, and that the sale of souvenirs bearing the image of Benito Mussolini has been banned in the region of his birth of Emilia Romagna in Italy. These newsflashes are bolstered by articles on issues of common European interest – such as a feature on certain European athletes at the Olympic games, and an article on the European Parliament’s LUX prize which celebrates films that promote European values and traditions. The paper also boasts a ‘Eurofile’ section which echoes the culture section of traditional newspapers, and contains longer-form contributions, such as Pete Paphides’ celebration of the influence of the musical genre of Europop.

So it seems that The New European is much more than a howl of protest; instead it seeks to illuminate why the remain voters were so indignant with the result of the referendum through its coverage of issue affecting European countries beyond the United Kingdom, which implicitly and expressly endorses the position that such things should matter to the reading public. One could argue that the local news-esque coverage of matters such as planning disputes in Germany and alcohol licensing changes in the Netherlands are not significant enough to be covered by a new transnational method of reporting; they stray from Habermas’ call for reportage on positions in other Member States on the ‘big’ issues affecting Europe. Such coverage is undoubtedly important; a good example of this is The Guardian’s call for contributions of what the European Union means to different European citizens in various countries during the referendum campaign in the United Kingdom.

Indeed, this example corresponds more closely to Habermas’ calls for a change in media practice rather than a revolution in media structure. However, I would argue that even extensive coverage of different Member State positions on issues facing the European Union would not contribute to a true sense of civic solidarity; instead it entrenches the perception of the other Member States as merely negotiating partners in a shared technocratic endeavour. In contrast to a limited focus on grand political moments of European integration, the coverage of smaller scale local issues that affect citizens in other European countries can help to build a sense of empathy between European citizens, and help to create a sense of understanding of other cultures beyond the figures who represent the Member States in the often adversarial proceedings in Brussels.

What next, then, for The New European? One option is to go beyond the ambit of Habermas, and to expand the paper to a truly transnational operating structure, with a supranational editorial board determining the broad thematic content and various national sub-editors managing the details of the editions in the local language. Instead of a formal expansion which would require great financial resources, another option would be the promotion of similar pop-up papers in other Member States that draw influence from the content of The New European.  If the creation of The New European is indeed the vanguard of a new trend in the European media’s coverage of issues affecting other European countries, then the result may well be steps towards a strengthened sense of European identity that would help to ensure that another destructive event such as the Brexit vote which gave birth to the paper does not occur again.